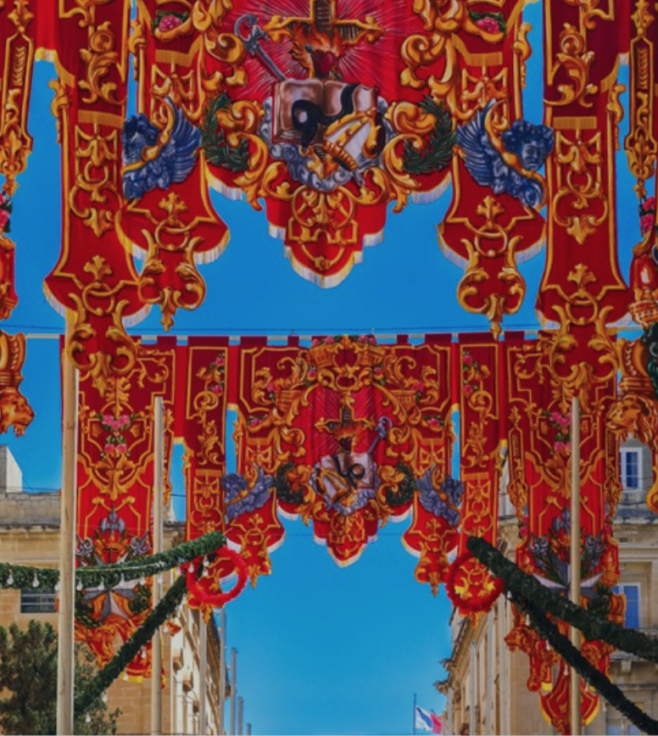 Five traditions to enjoy on your Maltese holiday

No matter which week or month you pick to visit, if it’s summer there will be at least three – usually more – village festas happening around Malta. Now if there’s one thing you need to appreciate, it’s that the village festa is a really big deal on the island, and the entire town will be decked out in full regalia throughout the week.

And by full regalia, we mean that you will be hard pressed to find a street that is not dressed to impress, with the patron saint’s colours, cheerful festoons and gorgeous tapestries. At night, the church will be gorgeously lit up, a spectacle in itself, and don’t be surprised if your hear the jaunty march band music coming your way. Add some popcorn and myriad colourful balloons, and you’re part of one of Malta’s biggest and most beloved traditions. Which brings us straight to…

Petards!
Also a staple of the Maltese festa, these can catch you unawares and can give you quite the fright unless you have been forewarned. Because with the village festa, people start celebrating quite early on in the day…first thing in the morning, in fact, to hail their patron saint with a salvo that can cause quite a racket. Now you’re in on the secret, you can relax in the knowledge that those explosions in the sky are nothing but a happy celebration.

Daytime petards are followed by the most spectacular and colourful fireworks at night, so make sure you get invited to a local’s rooftop so you can enjoy the show.

Pastizzi after Sunday mass
A must-do ritual, and sometimes also referred to as the ‘champions’ breakfast’ by the Maltese. You will notice that many of the island’s traditions are steeped in religion, but don’t worry – you don’t need to be religious to enjoy this particular ritual! Many Maltese families will wake up for Sunday early mass at 8AM, and then go on en masse to enjoy a cheap and cheerful breakfast featuring this wonderfully flaky delicacy as the star.

But there’s another secret tradition for the younger generation, who enjoy clubbing until the early hours of the morning! Coffee (or tea) and pastizzi first thing at 6AM are the perfect hangover antidote, so it’s quite lucky that many pastizzerias in the clubbing areas are open at this hour of the morning! Whoever would have thought that the cure to a hangover would be so simple!

Pink sausages on the BBQ
With the weather being so gorgeous, it should come as no surprise that BBQs remain one of the best ways of socialising. Whether it’s a beach BBQ or a rooftop BBQ, or even a posh one at an al fresco restaurant, the Maltese just love a good barbie – and it’s all the better if it includes one of the ubiquitous pink sausages that somehow take on all the taste of the most gourmet of meals when served on the grill, under the stars. Must be the amazing vibe…

Beach days out – a day at the beach is a big affair, even if it happens at least four times a week. Preparations start way in advance, usually the night before in fact, with the grown-ups planning all the snacks and ‘essentials’ that will be packed up in the car. And by essentials, we literally mean half the household – including that portable radio that runs out of battery after half an hour.

If you’re invited to one of these jaunts, chances are that you will be expected first thing after breakfast, or maybe even before. Depart any later, and you risk getting all the blame if the most coveted parking spot right next to the preferred bathing spot is already taken. You have been warned!

This site is registered on wpml.org as a development site.